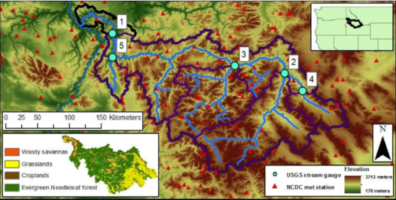 Increasing greenhouse gas concentrations have perturbed the radiative balance of the earth-atmosphere system and led to human-induced global climate change. There is strong scientific evidence indicating climate change is expected to increase the frequency, duration, and intensity of extreme temperature and precipitation events and thus negatively impact associated heat wave, drought, flood, and wildfire phenomena. In the western U.S., there is clear concern for increases in wildfire occurrence and severity due to projected climate changes.

This project used a modeling approach to examine the adverse water-quality impacts due to extreme wildfires and associated runoff erosion under projected climatic changes across the western U.S. The overarching goal for this particular proposal is to advance our capability to simulate post-fire runoff erosion at scales larger than a single hillslope, in order to examine the relative contribution of sediment being released to larger streams and rivers in response to wildfire. We used a newly-developed physically based modeling framework that combined large-scale hydrology with hillslope-scale runoff erosion (VIC-WEPP).  Towards the overarching goal, we had following interrelated specific objectives:

1. Implementation and evaluation of model performance (at experimental sites).
2. Implement and parameterize model over the Salmon River basin (SRB) of central Idaho.
3. Using simulation, examine the sensitivity of SRB erosion rates to climate versus land cover or soil type.