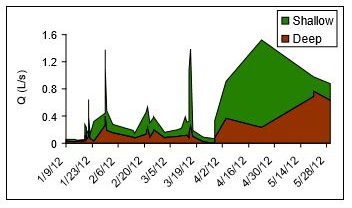 Soluble, reactive nutrients such as nitrate and dissolved organic matter (DOM) are of particular concern. Nitrate and DOM are widespread water quality issues in Washington, with over 700 water bodies currently listed as impaired with respect to dissolved oxygen and more than 40 sites listed as impaired by high total phosphorus or total nitrogen levels.

In eastern Washington, higher precipitation and discharge occur in the cooler winter months, causing the majority of contaminant mass flux from watersheds to occur during periods that have thus far been largely unstudied.  In this study, we used WSU’s Cook Agronomy Farm as a study system to: 1) understand how hydrologic variability affects a) nitrate and DOM transport from agricultural fields to surface water and b) in-stream fate of nitrogen, and 2) use this information to develop a model that predicts terrestrial-to aquatic contaminant transport under current and anticipated future climate.

We found that the annual nitrate flux from tile drains during the 2012 water year was 13.2 kg N ha-1 y-1, with 84% occurring during winter/spring runoff events. The annual DON flux was 0.7 kg N ha-1 y-1, with 71% occurring during high flow events. Total dissolved N losses accounted for about 10% of the average N fertilizer applied to the tile-drained area.  We also found little evidence of nitrate removal from a streamside buffer or along a stream during winter conditions, suggesting that DOM availability likely has little role in instream nitrate dynamics during this period, when low temperatures and flows are high.