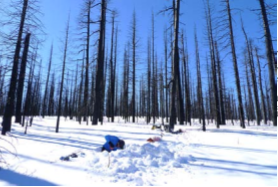 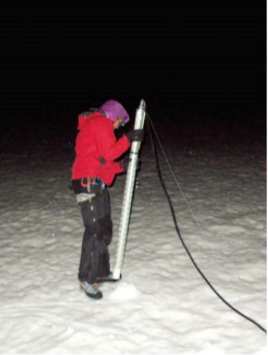 In the Western United States, melt water from mountain regions accounts for much of the annual stream flow. In the Cascade Mountains of Washington State, most of the annual precipitation falls during the winter-spring and is stored in the snowpack (Elsner et al., 2010; Vano et al., 2010). About more than 70% of runoff is derived from the melting snowpack, transferring water from the relatively wet winter season to the typically dry summers (Mote et al., 2005).

Spring snowpack levels in the Western United States have declined considerably since the 1950s.  While warming temperatures are a well-recognized factor leading to the reduction in the snowpack and glacier retreat, another cause of accelerated melt is the deposition of impurities onto the snow and glacier surfaces.  One such impurity is back carbon (BC), which is a dark absorptive particle produced by the incomplete combustion of biomass, coal and diesel fuels.  BC deposited on snow and ice affects climate and water resources by reducing the albedo of snow and ice surfaces and accelerating snow and ice melt (Hansen and Nazarenko, 2004; Ramanathan and Carmichael, 2008).

The primary objectives of this study were to further characterize the spatial and temporal variability of BC deposited in Washington snow and glacier ice, and to begin to assess the potential role of BC in accelerating snow and glacier melt.  BC concentrations in Washington’s winter snowpack were found to be relatively low, however, BC concentrations are highest during years with low snow accumulation. This has important implications for Washington’s snowpack under a changing climate. Our findings indicate that a shallower snowpack in the future could result in higher BC concentrations in snow, thus exacerbating snowmelt.