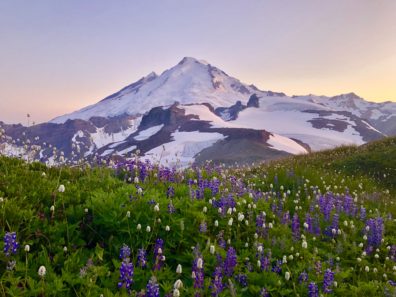 The Pacific Northwest (PNW) is expected to continue to warm as a result of climate change. The headwaters of the Nooksack River originate from glaciers on Mount Baker that have experienced significant changes over the last century due to climate change. Future climate projections of the Nooksack River suggest temperature increases and variable changes in precipitation will lead to increases in winter flows and decreases in summer flows. These longer and drier summers are leading to more frequent and intense wildfires as a result of anthropogenic climate change. Black carbon (BC) comes from the incomplete combustion of biomass and fossil fuels. Additionally, snow algae are generally dormant over winter, coming to life as snow begins to melt because the water brings nutrients. Therefore, snow algae growing seasons are responsive to climatic changes.  The extension of the PNW summer season is potentially enabling more frequent and intense snow algae blooms. When deposited on the cryosphere, the frozen water domain, BC and snow algae reduce the surface albedo of snowpack, which can enhance meltwater generation.  The primary objectives of this project are to document the impact of BC and snow algae on surface albedo of snow and ice in the headwaters of the Nooksack River in order to help refine albedo estimates in current hydrologic and climate models. These results will be utilized by the Nooksack Indian Tribe located in Deming, WA, in the northwest corner of the state who rely on the Nooksack River for subsistence, commercial and ceremonial purposes.