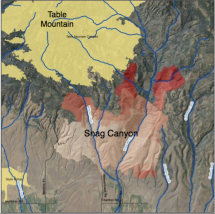 In recent decades, reductions in the seasonal snowpack in Washington State have caused earlier runoff and decreased discharge to streams thus affecting the availability of water resources. A consequence of the earlier snowmelt is an increase in wildfire frequency, size, intensity and duration. This increase in fire activity augments snowmelt because decreased forest canopy in the post-fire environment causes an increase in snowpack net radiation, increasing the rate and advancing the timing of snowmelt. In addition, the deposition of burned woody debris from charred trees on the snowpack reduces snow albedo (reflectivity) and further accelerates snowmelt.  What is not known how this effect attenuates over time, how it varies with burn severity, or how black carbon (soot) from the charred trees contributes to reductions in snow albedo.

This study quantified the duration and magnitude of snowmelt in the post-wildfire environment. In forest plots of varying burn severity and burn age in the Eastern Cascades, we measured snow albedo, snow water equivalent, forest structure, black carbon, charcoal and burned woody debris deposition during the snow accumulation and snow ablation seasons.  Study sites included the 2006 Tripod, 2012 Table Mountain, and 2014 Snag Canyon Fires, allowing this effect to be studied over 0.5 to nine years post-fire. The burn areas of the 2012 Table Mountain and 2014 Snag Canyon fires nearly intersected and provided an excellent opportunity to conduct a controlled experiment to quantify the temporal change of post-fire effects on snowmelt. By examining the linkage between impurity deposition, snow albedo, and snowmelt during the snowmelt period, we were able to assess how burn age and burn severity affects snowmelt, the timing of river discharge, and the availability of water resources.